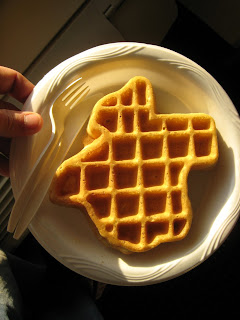 Everything in Texas is Texan. :)
Posted by Jason Atkins at 5:57 AM 1 comment:

The good news is that (whether it's true or not) the army is denouncing the assassination, claiming that there is no coup in process, and that the constitutional line of succession will be followed. It calls for the leader of parliament to take control for two months until new elections will be done.

We also heard from both of the missionary families in our team who are there right now, and they said that even though they heard RPG's and automatic weapons for a few hours during the night, they are safe - and that the population seems fairly calm. The danger is that if the assassinations are seen as ethnically motivated, there could be tribal warfare. However, from what we're hearing people are remaining calm and waiting for some details on the radio about what happened. When that announcement is made (the army is reportedly not allowing anyone on the radio for now), it will do a lot to either diffuse or escalate the situation.

The government in Guinea-Bissau is one that has had a lot of instability and we've always known things like this were a possibility, we just hope that it doesn't go past this into a full blown war. Hopefully the national memory of the horror of the revolution nine years ago will still be fresh enough to prevent that.

It's a little scary to think that something like this could spark an armed uprising that could reduce everything we've worked to do to rubble. We serve a big God though, and He has the ability to intervene if necessary.
Posted by Jason Atkins at 3:51 AM 1 comment: