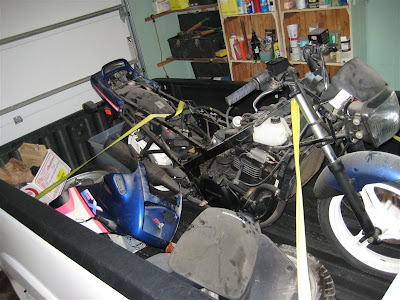 has been sitting in a garage taken apart for several years, so it's going to need a good cleaning, tune-up, and reassembly. I'm hoping none of that will to too far outside of my ability to "figure it out" and we'll end up with a good, reliable bike for pretty cheap.

Nothing like a good project! I'll make sure to post pictures of progress as things come along. I'm hoping not to let this consume too much of my time over the next couple of weeks!
Posted by Jason Atkins at 11:34 AM 1 comment:

We found an interesting listing on Craig's list this week! I've been trying to figure out our transportation plan for when we're back in Bissau, trying to figure out what the best way is for us to get around. We still have our little 65cc scooter waiting for us, which is very handy (and cheap) for getting around inside the capital. However, as we've started to have reason to visit some villages and places outside of the city of Bissau, it would be really handy to have something that goes faster than 35mph! (For example, Sintcha Botchi where we have been visiting is about 140 road miles away.)

We have been using the existing transportation system which is a network of small Peugeot station wagons that run between the major cities. (The roads between the four biggest cities in Guinea-Bissau are pretty recent and pretty good, so they make decent time). They work fine, but with no set schedule and bad maintenance, their reliability isn't great and you (I) are sore for a couple of days after you arrive because of being folded in the back seat, lol. Not to mention the animals tied to the top of the car sometimes making "yellow rain" in your window which must remain open because of the lack of air conditioning (that's not merely a hypothetical concern, fyi.) :) Discomforts can be put up with, but the "seti-pluses" are also pretty expensive if you use them often, and only go to the cities they go to. So, when we go places other than the few main cities, you have to arrange for someone to meet you on the other end or take an even less reliable secondary transportation system called a candonga. (I'll make a note to snap a picture of these when we're back in Bissau, they're pretty funny.

So, the desire to have some flexibility in travel outside of the capital city has been in tension with the fact that we don't want to spend much to remedy it because we really want to get back to Bissau quickly and money not spent on other things is money that gets us back to Bissau faster!

So anyway, I've been flipping through Craig's list ads just to see if anything would jump out at us. There is a shipping container headed for Bissau in a few months to carry a donated block-making machine (an awesome story for another day), so if we found something now it could be shipped over, avoiding the problem with buying something in Africa: the fact that it hasn't been maintained and is way overpriced.

So, this week I think I might have found it! There is a Kawasaki EX-500 for sale here in metro Detroit. And the best part is that since it is in pieces in the owner's garage, he's willing to sell it for $500 even though it's a '93 with less than 10,000 miles! It didn't have any major problems when he stopped working on it, just needs to be cleaned up and put back together, have a new battery and tires, and it will be ready to roll! I'm sure it's pretty ugly right now, but if I can get it to run reliably, for $500 I don't care! So, I'm headed down to Warren tomorrow to take a look at it and see what kind of shape it's really in. It's better engineering than the Indian-made models available in Bissau, and cheaper to boot! I'm pretty excited about the possibility!

I've never worked on motorcycles before other than simple stuff on our little scooter, but armed with a good shop manual I'm sure I can figure it out (hopefully!) So, I'm excited to go see it tomorrow and see what we think.

I'll update tomorrow with info on how things went, and if it's not too terrible looking, some pictures...
Posted by Jason Atkins at 7:32 AM No comments:

For the first time in 2009, we're back to our own space, stuff, and room in Imlay City! We drove the 1,303 miles Tuesday and yesterday and got here last night at 1am. The combination of changing two time zones and driving 23 hours over two days meant we're having a bit of a lazy day today, but it sure is nice to be back home.

I think we're having a little family feast tonight but I'm going to have to start paying attention to what I eat, as I officially hit the big 5-0 mark last week (I've gained 50 lbs from my skinny Africa-sized version since we left Bissau last April!). Hopefully fundraising will fall into line and we'll be able to get back soon.
Posted by Jason Atkins at 10:21 AM 1 comment: