Craigslist and Ebay - Fueling the Shop!

It's been a while since I've taken the time to sit down and blog, but I thought I'd catch up on some of my projects while we're home. We're going to be sending another shipping container over to Bissau in January, for a big solar project at the center (more on that later). The container going over means there will be some extra space for other things, and we've set aside some money to round out the shop's equipment roster. For anyone not familiar with the project, we started documenting it (including a floor plan) on our website here.

I've been scouring ebay and craigslist in an attempt to make the money we've got go the furthest it can, and I've gotten some great deals! Some of the things I got were ready to go, some needed fixing, some just needed supplies bought, and many will require the motor being removed and replaced with one compatible with our power over there, and rewiring. For anyone interested, here are the main things so far: 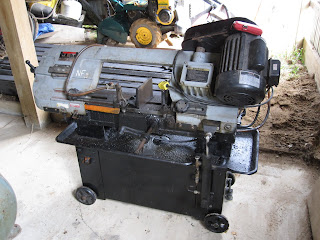 A nice 7x12 metal cutting bandsaw! I got it used on eBay. We have an abrasive chop saw like this one already, but it's pretty obvious as we use it that it wasn't meant for the kind of abuse and level of use we're going to need in Bissau. Our current one will become part of our mobile setup, and will do a great job at that. Meanwhile, this new (old) bandsaw will give us a quieter (though slightly slower) way to cut steel in the shop. Since the center is a school as well, the decreased noise level will be appreciated by all. The saw is working great after some adjusting, but will need a new motor, pulley, and rewiring to make it compatible with our 50Hz generator power. 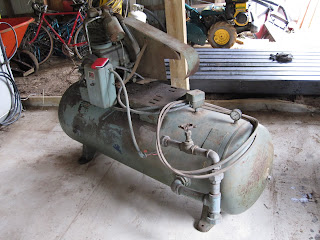 A sweet air compressor. We have a little portable compressor that I sent over last time, but it already wasn't in great shape, and doesn't have enough snort to keep up with several of our tools. It's making some funny noises since it wasn't meant for the power over there, so it will live longer if we can move it into our mobile setup which uses American power. This new one is about 2x as big, and is a step above in terms of durability, being industrial. It retailed around $2000 when it was new 15 years ago, but I got it for $275 without a mot 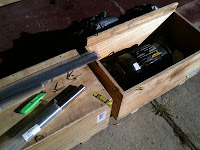 or, which I would've had to replace anyway! I found a replacement motor on eBay and lucked out, winning it for less than the cost of shipping it to me! There's some flaking paint on it, so I'm going to sandblast it and give it a new coat of paint, but other than cleaning it up, installing the new motor, and putting it back together, it should be ready to roll! It's big enough to be able to run all of the air tools we have over there, and the sandblaster I'm hoping to take over this time too! 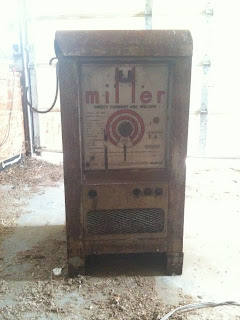 A monster DC stick welder. We have a very nice gas driven Lincoln welder that was sent over last time, but with fuel being so expensive, it's a little stressful to work knowing how much every minute is costing! That Lincoln wel 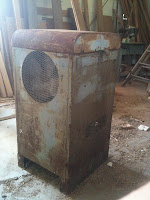 der will transition to being the heart of our mobile setup. I paid $42 for this stick welder from the 80's. It will run from the youth center's power, so we can take our time and be more careful. It needs sheet metal repair, sandblasting, painting, and new welding leads, but then should be ready to rock! It's an 800 lb monster, and should be way more than we ever need - but for $42, who can complain, right? 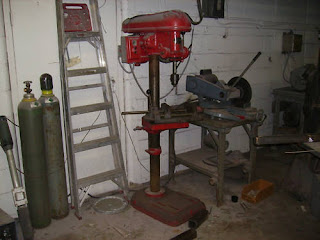 This old drill press was a great find on eBay. I brought a used benchtop drill press over with us last time, and it's gotten a ton of use already. Unfortunately, it has a wobble which makes it hard to drill accurately and has snapped several smaller bits because of it. This one should be hardier and is supposed to spin nice and true. I haven't seen it in person yet, but we got a great deal on it - and as an added bonus it looks like it's motor is already dual rated for U.S. and European power, so the motor won't even need to be changed out! Unfortunately the seller lost the top belt cover, so I'll have to make and paint a new one of those, but other than that it should be ready to go! 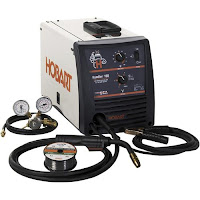 A small wire fed welder. Much of the fabrication work we do uses thin metal tube stock, which is what's mainly available in Bissau. It's difficult to stick weld since it's so thin (19 gauge), so we're going to use this machine to make those welds stronger and work more quickly. Other than buying more supplies for it and changing the power plug once we're over there, it's all set and works great! 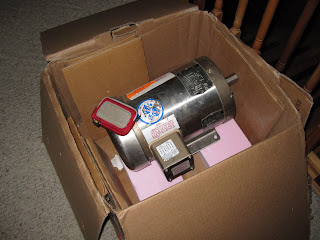 The last big tool is still in the planning stages. Like I said before, the chop saw we have wasn't meant for the workout it's getting in our application. The bandsaw will be great, for quieter, gradual cuts, but there will still be some times when we need a rotating blade for cuts. I did some research on industrial versions of the abrasive cut off type saw we have, and found out about saws like the Kalamazoo K10B. They cost a pretty penny, but have a nice powerful motor that won't wear out. I then did some more reading and found that there's a newer style of steel cutting saw called a dry cut saw, which works the same way, but uses a carbide tipped saw blade to do the cutting. This dry cut style is actually cutting chunks away instead of grinding fragments - so it cuts clean lines and cuts more quick 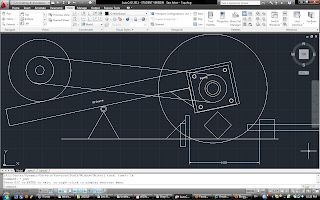 ly, doesn't heat up (and warp) the thing you're cutting. The blades are supposed to last about 10x as long as the abrasive disc kind. Sounds great, but since we'll have to send the blades back to the U.S. to be sharpened, we kind of need the best of both worlds. So, I'm going to build a saw from scratch that can do either - we'll use blades when we have them available, and then switch a pulley to be able to use abrasive discs when we can't. And, by building it, it's going to end up being a lot cheaper than buying either. Good plan, hopefully!

I've got big plans for the shop once we get back, and the new tools are going to put us in a good position to really be able to get stuff done. I'll try to post some updated photos as all of these various conversion and restoration projects have some progress.

It's been really fun being home and having the opportunity to find tough, well-engineered machines at used prices, instead of having to pay 2x for Chinese junk over in Bissau!
Posted by Jason Atkins at 5:03 PM No comments: