Sometimes in the process of learning another language you get an interesting peek into the culture of the people who speak the language. For example, in Creole there is a verb, “neni”, meaning “to run, greet someone, and hug them”. The fact that we don't have a word like that shows something about the way we greet each other compared to the way Guineans greet each other.

We recently ran across an interesting word. I have always known that the following mindset existed in Guinea-Bissau, but never found a word for it. We see things cobbled together all the time. Half of the taxis in Bissau are push started each morning by neighborhood kids because their starters don't work, it's routine to see auto repairs done with zip ties, I saw someone last week using cardboard as a replacement turbo gasket on an engine, etc. Doing things in an excellent way is not valued by this culture as it is in ours. This characteristic of Guinean culture comes largely from how hard it is to survive, I'm convinced. People spend so much energy on daily life (cooking, eating, getting water, caring for their health, etc) that there isn't enough energy to be worried about doing things better than they need to be done. If a zip tie makes your car work again, then it's a sufficient repair. Why spend the time and money finding someone to weld and repaint the broken area if the zip tie make the car work just as well?

Njita (v): To fix something temporarily

And some visual definitions I've been collecting over the last couple of months as examples of the way we're not going to do things: 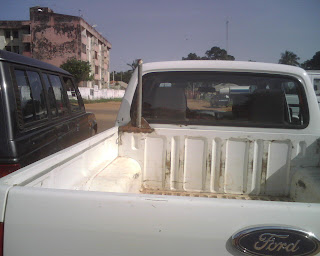 I think this is a flagpole. Not that bad, but since they didn't bother to paint it, in 10 years that truck bed will have a giant hole rusted into it. 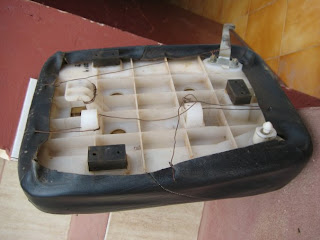 Our bike seat, worked on by a local mechanic while we were gone. Check out that craftsmanship. 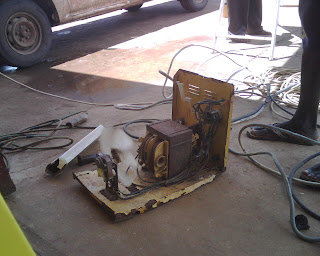 The welder at the local building supply store.

I have been dreaming about the machine shop: how to set it up, lay it out, and how to impart a mindset of excellence; both in what we produce and in how we operate. Tools here are shared among many people because there aren't many of them, which is good as it promotes a culture of sharing, but also has the unfortunate side effect of meaning there are no complete sets of anything anymore because of tools that have been borrowed and either broken or never returned. Then, since someone only has part of the set, they use the wrong tool to do the next job and end up ruining the tools that are left over because they weren't designed for what they're now being used for. So, setting the shop up in a way that fits into the culture but also protects our equipment is a little difficult; we want to be good neighbors but don't want to lose 20% of our tools each year!

I am anticipating that a good dose of patience and perseverance will be necessary to change the mindset of the people that will eventually run the shop that it is worth the extra energy to build things stronger than necessary, spend the time to rustproof them well, and organize the shop in a way that it stays well supplied and won't allow tools to walk off. But, if it were as simple as just building a building instead of changing mindsets, we wouldn't need to be over here! :)
Posted by Jason Atkins at 3:04 AM