Well, we thought we were busy enough the few days we have left before we fly out, but when opportunity knocks you have to answer! A few months ago Emily and I thought about the possibility of bringing a dog to Africa with us. I was really interested in a breed called an Australian Cattle Dog because they are great natural herders - so in addition to being a dog, which is already awesome, these can "earn their keep" a little by helping out when we start our farming project and have animals to watch.

We contacted a rescue society for this kind of dog, but then we gave up on the idea when we saw how expensive it is to check a dog on an international flight! Driving to the dentist yesterday, Emily spotted a sign saying that a family near us had Aus. Cattle Dog pups for sale! We talked about it, and in the intervening time I had learned that a couple of dogs per flight can be brought as carry-on luggage for a lot less money. So, we called Delta to find out if either of the two spaces was still available on our flight, and there was one left!

So we headed to Walmart to get a pet carrier and some basics, then to the family's house, and picked out our new pup, Sydney! 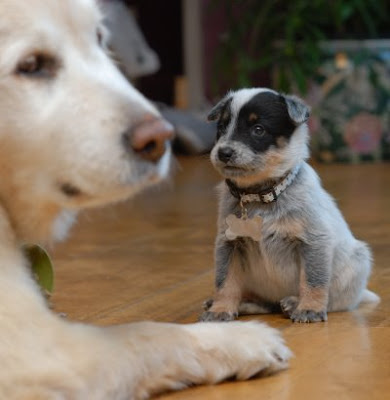 Here she is looking at her adopted mom for the week, our family's golden retreiver Anna. (Click here for the bigger version)

The flight over is going to be a rough 10 hours I'm sure, but I think we can manage it as long as we can get her to stop crying in the night, but she seems to be assimilating well, so I think we'll be able to manage it. Then, we'll get her to Africa where she can romp around and chase animals to her heart's content! 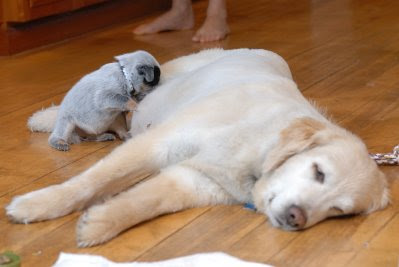 She does seem to be a little confused about the fact that not every dog is available to nurse, but she does drink regular milk and eat food once she's given up on Anna, so at least that's good. :)

What an adorable puppy! Nancy (Tom's sister) had a mix with Australian sheepdog in it, and it was a good dog. Enjoy your little cutie!

Jason, I cannot wait to play with Syndney on Sunday!!! You KNOW I've been wanting a new puppy since I had to put Sheba down exactly three weeks ago today. That was the roughest thing I've EVER had to do. Sooooo..you may want to check my pockets as I leave tomorrow! ahem!!!! lol Must look up what this type of dog looks like as an adult..Sheba was bred to be a sheep herder..not sure you knew that...they are smart for sure..extremely sharp animals...and yet, loveable! Great pick! Most travel well..we've seen quite a few dogs going w/folks on planes and they do ao lot of sleeping except on takeoffs and landings..that must hurt their ears..just give her some gum to chew! lol